Let us proceed in reverse order:

The school apologized for the yoga instructions and even banned the use of the Sanskrit word, “Namaste.” Strange. Incredible. But given the nature of the religiosity of these folks, understandable. And interestingly enough the parents do have a valid argument of sorts: given that public schools do not allow expressions of Christian faith, like prayer, why is it that Hindu expression is allowed? The school answers that they are not allowing Hindu expression but simply extracting a popular element from the matrix of Hinduism that is useful for relaxation and de-stressing. That of course raises a very big question that has elicited thoughtful and intelligent debate and discussion among various people: can you really and legitimately abstract some element from a given religious tradition and use it for some other purpose? The true use and place of yoga is in uncovering the presence of God within one’s consciousness, not just for exercise and de-stressing. People can and do have different opinions on this topic, but suffice it to say these folks are not interested in that kind of debate but prefer to protect their children from “satanic religion.” There are a number of conservative Christian websites that warn of the “perils” of yoga!

India has a lot of problems. Political, social, and yes even religious. This cradle and home of a very deep spiritual tradition has been beset with radical Hinduism that equates religious identity and national identity and raises caste to a sacred rule. It has also been beset with unsettling violence against women and with calls for repression and censorship of any other religious views or of any criticism of Hinduism. The story here is not that serious but it is also worrisome. The fake religiosity and spirituality is rampant and that does not bode well; it is not a sign of religious health.

What’s interesting here is that this phenomenon includes not only formal religion but also that fuzzy spirituality that supposedly was growing in our time, spirituality “without religion.” No comment here. Take it for what you will; it pretty much matches my own observations of life around me. And what I think is much more important is that this is a small piece in a much larger and darker picture which I point to below.

And then there was this story just about February weather:

Both sides have their valid points, and I don’t think anyone will convince the “other side” of a change in perspective. But it is refreshing that we don’t idealize and idolize our “holy” figures–like we have in the past with so many so-called saints. My favorite in this regard is St. Bernard who called for the killing of Moslems. Enough said. As one who doesn’t really believe in this canonization thing, I figure if my church wants to play at this let them. My concern is NOT to “get to heaven,” as a reward for “being good,” but the Presence of God here and now and what that means here and now. For every human being every breath is not some arbitrary, mechanical event but a pure gift and a messenger from Absolute Reality, saying, “You are my child; you are one with me.” To hear this, to know this, is what is called “heaven” or paradise; nothing more is needed. 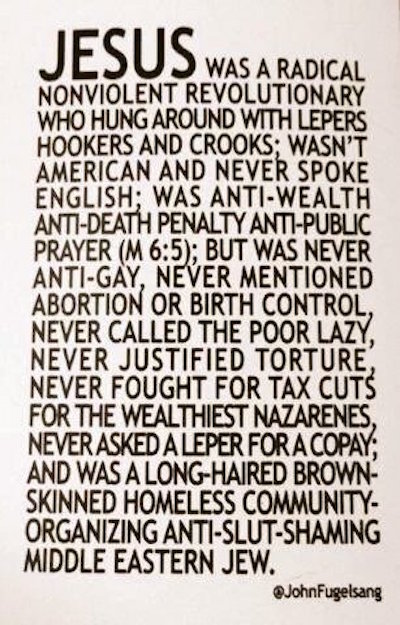 I wish more Christians would try to imitate this Jesus.

Marvelous. And very significant if you follow the implications of what he said.

“So I went back to the working-class, in which I had been born and
where I belonged. I care no longer to climb. The imposing edifice of
society above my head holds no delights for me. It is the foundation
of the edifice that interests me. There I am content to labor, crowbar
in hand, shoulder to shoulder with intellectuals, idealists, and
class-conscious workingmen, getting a solid pry now and again and
setting the whole edifice rocking. Some day, when we get a few more
hands and crowbars to work, we’ll topple it over, along with all its
rotten life and unburied dead, its monstrous selfishness and sodden
materialism. Then we’ll cleanse the cellar and build a new habitation
for mankind, in which there will be no parlor floor, in which all the
rooms will be bright and airy, and where the air that is breathed will
be clean, noble, and alive.

Such is my outlook. I look forward to a time when man shall progress
upon something worthier and higher than his stomach, when there will
be a finer incentive to impel men to action than the incentive of
to-day, which is the incentive of the stomach. I retain my belief in
the nobility and excellence of the human. I believe that spiritual
sweetness and unselfishness will conquer the gross gluttony of to-day.
And last of all, my faith is in the working-class. As some Frenchman
has said, “The stairway of time is ever echoing with the wooden shoe
going up, the polished boot descending.”

“ I am losing precious days. I am degenerating into a machine for making money. I am learning nothing in this trivial world of men. I must break away and get out into the mountains.”