Let’s consider a number of seemingly disparate paths that religious seekers have taken. They will connect–or disconnect for that matter–at a level which I cannot put in words. But I think at the end you will get the idea. Not all roads lead to….. Some roads simply lead to…..more words…..and a mirage wrapped in an illusion encased in an intellectual riddle…. Then you become engaged in unraveling the riddle, perhaps earning yourself a bit of a reputation and maybe even some money.

Stephen Batchelor. The man has earned quite a name for himself as a leading voice of this new movement of what is sometimes termed as secularized, rational Buddhism. These people see Buddhism as a resource for a “better,” “happier” life using a kind of technology of the mind as a tool for self-improvement. Batchelor spent quite some time both in a Tibetan Buddhist setting and in a Korean Zen setting but he dropped out of all that and pretty much rejects the “metaphysical and mystical” aspects (whatever they be) of Buddhism. He believes that the monastic element of Buddhism is unnecessary baggage, and what he promotes is a kind of attenuated mindfulness and secular meditation. He doesn’t believe that all the elaborations of Mahayana Buddhism have any place in the modern world. His aim is to get back to the “original teaching” of the Buddha–he rejects almost all developments in Buddhism outside some elements of the Pali Canon. This reminds me of the scholars trying to figure out the original words of Jesus. As an intellectual exercise that may be an interesting enterprise, but for spiritual and religious purposes it can be quite misleading. The implication is that there is this original teaching and all later development is an unnecessary and even erroneous accretion. The thing is that the heart of the original teaching can and does have a real development potential and over time the full meaning of what the founder said needs to be unpacked and developed. An acorn is an acorn and a tree is a tree, but the tree is truly a legitimate development from the acorn. Certainly a lot of extraneous things can get introduced over time and a religion needs some pruning on occasion and certainly a new kind of formulation has to be used at times, but it is a kind of intellectual arrogance and dogmatism that rejects the tradition of the religion. The problem here, however, is not intellectual–you are not going to argue your way to the truth with these people.

Nanavira Thera. A very peculiar character. Also, a culture hero of sorts for the secularist Buddhists like Stephen Batchelor. He is British by birth(Harold Musson by name), well-educated, financially reasonably well-off. As a young man, after World War II, he is under stress from a profound dissatisfaction with his life and the culture around him. He and a friend give up everything, leave for Sri Lanka, and become Theravada Buddhist monks in a monastery. Not satisfied with what he finds he moves out to a hut in the jungle and lives as a hermit for the rest of his life. He does not have any teacher or guide and that may explain some of the problems he runs into. Like Batchelor, he rejects a lot of the development of Buddhism in the Mahayana tradition.   As one commentator put it: “Nanavira gives no credence to later manifestations of Buddhism, both Theravada and the entirety of Mahayana, only deeming the earliest suttas to be genuine, to reflect what the historical Buddha must have expressed.” His practice of mindfulness meditation is especially intense and from his writings we can see that he has seen something of the truth of Buddhism. Note this remark about him from his publisher: “For Nanavira his major breakthrough was, after many years of effort and practice, realising that, with the exception of the Buddha, we have all got this wrong. For the Buddha alone makes it clear that, contrary to what we think, there is actually no ‘I’ or ‘self’ present in our experience. As Nanavira points out, this is the unique insight of the Buddha which, if developed, will ultimately lead to ‘extinction’ or ‘enlightenment’.” You can see in this language something very profound but it needs quite a bit of explanation or elaboration as in the Mahayana School. Nanavira writes a book about all this and it is a very complex account including forays into Western existentialism and phenomenology, and modern logic and science. Nanavira claims to have achieved a kind of enlightenment which is in effect a liberation from desire in the sense that you see its essential nature and are not ruled by it. The Wikipedia entry says this about him: “ Ñāṇavīra Thera apparently attained sotapatti, or stream-entry, on 27 June 1959. The one who has “entered the stream” has ipso facto abandoned personality-view (sakkāya-ditthi), which is the self-view implicit in the experience of an ordinary worldling not free from ignorance, and understood the essential meaning of the Buddha’s teaching on the Four Noble Truths. Ñāṇavīra Thera’s writings after 1960 express this very kind of certainty: no more wandering in the dark, no more doubt or speculative guessing.” Now there’s some big problems in his position, and I don’t mean one verbal explanation versus another one. To argue with him would be useless because he would refer to his own experience. But enlightenment is not something that one HAS as an experience, but this is something that one is…..and you cannot bring that out as another object for someone to see. To talk about it that way is to miss the target by the width of the universe. What you do see in an enlightened person is the quality of life lived by such a person and then you can judge the level of enlightenment there.   So finally there is this great sadness (for me at least) about this enigmatic spiritual figure: he commits suicide. Explanations are given, but none of them add up for me. They say he is beset by physical ailments and almost uncontrollable urges to lust which is somehow connected to the ailments. The only way out is to leave the jungle and get modern medical treatment and probably never to return. But he fanatically “desires” to deepen his “breakthrough experience” and will not leave. But staying has become impossible also.  The only way out that he sees is suicide. Not good. Very, very sad.

Recall the Zen goose. Remember, there’s this goose in this large bottle with the typical narrow neck. Now….how do you get the goose out without breaking the bottle…or…without harming the goose?

Follow the path that gets the goose out of the bottle….

Silence and solitude.  There is the path of solitude and silence. But this silence is not merely the absence of words and this solitude is not merely the absence of other people. There is a depth here that few ever touch. Merton wrote about it …on occasion…but among his various writings there is nothing better than the Introduction to the Japanese publication of Thoughts In Solitude. It begins: “No writing on the solitary, meditative dimensions of life can say anything that has not already been said better by the wind in the pine trees. These pages seek nothing more than to echo the silence and peace that is ‘heard’ when the rain wanders freely among the hills and forests. But what can the wind say where there is no hearer? There is then a deeper silence: the silence in which the Hearer is No-Hearer. That deeper silence must be heard before one can speak truly of solitude.”

Simply living in an isolated manner is not this reality of solitude. Merton again: “…if you imagine the solitary as ‘one’ who has numerically isolated himself from ‘many others,’ who has gone out of the crowd to hang up his individual number on a rock in the desert, and there to receive messages denied to the many, you have a false and demonic solitude. This is solipsism, not solitude. It is the false unity of separateness, in which the individual marks himself off as his own number, affirms himself by saying, ‘count me out.’”

We live in a culture of many words, many explanations, many arguments. Agitation and perpetual movement is in the air; there is a name and a number for everything; and if we are not engaged in perpetual communication we seem to lose our existence. Whatever spiritual path we are on, it becomes infected with this dynamism of desperate self affirmation (recall Thoreau’s “Most men live lives of quiet desperation.”). Merton sums up what is at stake in Christianity:

“Christianity is a religion of the Word. The Word is Love. But we sometimes forget that the Word emerges first of all from silence. When there is no silence, then the One Word which God speaks is not truly heard as Love. Then only ‘words’ are heard. ‘Words’ are not love, for they are many and Love is One. Where there are many words, we lose consciousness of the fact that there is really only One Word. The One Word which God speaks is Himself. Speaking, he manifests Himself as infinite Love. His speaking and his hearing are One. So silent is His speech that, to our way of thinking, His speech is no speech. His hearing is no-hearing. Yet in His silence, in the abyss of His one Love, all words are spoken and all words are heard. Only in this silence of infinite Love do they have coherence and meaning.”

Do you want to know what kind of life an enlightened being would live? One could consult the Sermon on the Mount for a bit of a glimpse into what that would mean. There are other glimpses. Consider this set of verses from, I believe, Shantideva, as found on the Dalai Lama’s website:

With a determination to achieve the highest aim
For the benefit of all sentient beings
Which surpasses even the wish-fulfilling gem,
May I hold them dear at all times.

Whenever I interact with someone,
May I view myself as the lowest amongst all,
And, from the very depths of my heart,
Respectfully hold others as superior.

In all my deeds may I probe into my mind,
And as soon as mental and emotional afflictions arise-
As they endanger myself and others-
May I strongly confront them and avert them.

When I see beings of unpleasant character
Oppressed by strong negativity and suffering,
May I hold them dear-for they are rare to find-
As if I have discovered a jewel treasure!

When others, out of jealousy
Treat me wrongly with abuse, slander, and scorn,
May I take upon myself the defeat
And offer to others the victory.

When someone whom I have helped,
Or in whom I have placed great hopes,
Mistreats me in extremely hurtful ways,
May I regard him still as my precious teacher.

In brief, may I offer benefit and joy
To all my mothers, both directly and indirectly,
May I quietly take upon myself
All hurts and pains of my mothers.

May all this remain undefiled
By the stains of the eight mundane concerns;
And may I, recognizing all things as illusion,
Devoid of clinging, be released from bondage.

And we conclude with something totally wordless, an icon of that deep solitude and silence which surrounds all and is within all: 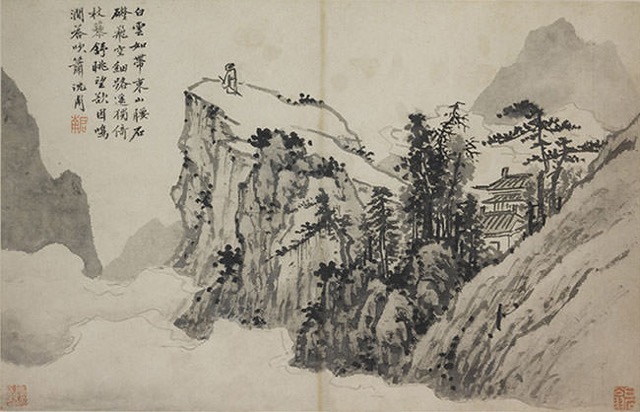