“The Khempo of Namgyal deflected a question of mine about metaphysics…by saying that the real ground of his Gelugpa study and practice was the knowledge of suffering, and that only when a person was fully convinced of the immensity of suffering and its complete universality and saw the need of deliverance from it, and sought deliverance for all beings, could he begin to understand sunyata…. When one read the Prajnaparamita on suffering and was thoroughly moved, ‘so that the hairs of the body stood on end,’ one was ready for meditation–called to it–and indeed to further study.”

“We started talking about dzogchen and Nyingmapa meditation and ‘direct realization’ and soon saw that we agreed very well. We must have talked for two hours or more covering all sorts of ground, mostly around the idea of dzogchen, but also taking in some points of Christian doctrine compared with Buddhist: dharmakaya…the Risen Christ, suffering, compassion for all creatures, motives for ‘helping others,’–but all leading back to dzogchen, the ultimate emptiness, the unity of sunyata and karuna, going ‘beyond the dharmakaya’ and ‘beyond God’ to the ultimate perfect emptiness. He said that he had meditated in solitude for thirty years or more and had not attained to perfect emptiness and I said I hadn’t either. The unspoken or half-spoken message of the talk was our complete understanding of each other as people who were somehow on the edge of great realization and knew it and were trying, somehow or other, to go out and get lost in it–and that it was a grace for us to meet one another. He burst out and called me a rangjung Sangay (which apparently means a ‘natural Buddha’)…. He told me seriously that perhaps he and I would attain to complete Buddhahood in our next lives, perhaps even in this life, and the parting note was a kind of compact that we would both do our best to make it in this life. I was profoundly moved, because he is so obviously a great man, the true practitioner of dzogchen, the best of the Nyingmapa lamas, marked by complete simplicity and freedom. He was surprised at getting on so well with a Christian and at one point laughed and said, ‘There must be something wrong here!’”

“I am able to approach the Buddhas barefoot and undisturbed, my feet in wet grass, wet sand. Then the silence of the extraordinary faces. The great smiles. Huge and yet subtle. Filled with every possibility, questioning nothing, knowing everything , rejecting nothing, the peace not of emotional resignation but of Madhyamika, of sunyata, that has seen through every question without trying to discredit anyone or anything–without refutation–without establishing some other argument. For the doctrinaire, the mind that needs well-established positions, such peace, such silence, can be frightening. I was knocked over with a rush of relief and thankfulness at the obvious clarity of the figures, the clarity and fluidity of shape and line, the design of the monumental bodies composed into the rock shape and landscape, figure, rock, and tree…. Looking at these figures I was suddenly, almost forcibly, jerked clean out of the habitual, half-tied vision of things, and an inner clearness, clarity as if exploding from the rocks themselves, became evident and obvious. … The thing about all this is that there is no puzzle, no problem, and really no ‘mystery.’ All problems are resolved and everything is clear, simply because what matters is clear. The rock, all matter, is charged with dharmakaya…everything is emptiness and everything is compassion. I don’t know when in my life I have ever had such a sense of beauty and spiritual validity running together in one aesthetic illumination. Surely with Mahabalipuram and Polonnaruwa my Asian pilgrimage has come clear and purified itself. I mean, I know and have seen what I was obscurely looking for. I don’t know what else remains but I have now seen and have pierced through the surface and have got beyond the shadow and the disguise. This is Asia in its purity, not covered over with garbage, Asian or European or American, and it is clear, pure, complete. It says everything ; it needs nothing. And because it needs nothing it can afford to be silent, unnoticed, undiscovered. It does not need to be discovered. It is we, Asians included, who need to discover it.” 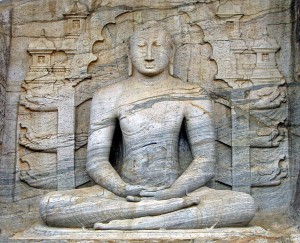 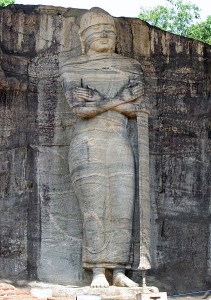